Feeling grateful for the rain this week.  Our soils, with their abundant organic materials are soaking it up and holding onto it.  Anyone still interested in buying some perennial edible plants?  This milder wetter weather is still good for getting a few more perennial plants into the ground.  Come on out to Eco-Sense on Saturday June 4th from 10am – 2pm.  3295 compton road.  As sales have slowed down, we are thinking of this as being the second to last open house. 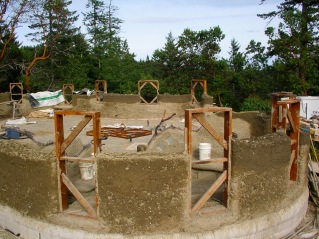 The start of MUD house building

For those paying attention to climate change, the news is filled with no end of horrors for people and the planet which can be really tough to process, but on a more positive spin, we are very pleased with the performance of our cob home.  The two foot thick load bearing cob walls made out of MUD (Modern Utopian Dwelling), are performing exceptionally well in our warmer climate (as are our olives, almonds, lemons, ginger and apricots).  Not only are our walls engineered for earthquakes, but they are fireproof, and keep out the sounds of howling gales.  This house does not shake in a wind storm.  But even better than all of that is it has now been 3 months since we had our last fire in the wood gasifier, and even back in mid February, we were only having occasional fires to supplement the solar hot water.  In our home, we use solar hot water both for domestic use (showers and sinks), and also to heat the home through warm water pumped though pipes in the earthen floors.  We have had enough solar hot water production to provide for all of our hot water and heating requirements.  This of course supplements the passive solar heating we gain from building our cob home in the sun and our efficient building design.

Some of our friends may remember that research study we did back in 2010/2011 with a grant from Vancity and the Real Estate Foundation.  We had all kinds of sensors in the walls and data loggers to monitor wall performance and energy use for one full calendar year.  It was the year when high tech met low tech to show how and why cob buildings can last for many centuries and how they perform from an energy perspective.

Our home performed exceptionally well that year even though it technically has an r-value of only R-24 (now much higher).  This research was performed in a year that had unusually low solar insolation (9% LESS SUNLIGHT in a 12 month period than average – which mostly occurred in the shoulder seasons – Spring and Fall).  Here are the links to two of the research reports.   Eco-Sense and the future of Green Building – Affordable, Sustainable Homes  and the technical information with lots of graphs

This all brings us to a new video series just released a couple days ago.  Four short mini documentaries on Earthen Architecture…it’s very well done, but we think they could also have included a fifth episode on earthen infill methods like “light clay” and cellulose (like our Eco-Hut).

Here’s the links to the videos.  Eco-Sense features in part one on Cob, and we have the last say at the end of episode 4.  Very inspiring videos.  https://groundworkseries.com

Here’s some quotes from others:

Pat Hennebury from Cob works referring to living in a cob house – “It’s like living in a hug”.

Meror Krayenhoff, SIREWALL rammed earth builder – “We’re willing to jog for cancer, but we’re going to paint our houses with carcinogenic paint. I’d like to think most people wouldn’t make those decisions if they knew all the toxic materials that are in their buildings, and the short life spans. Why don’t we have a building code that all houses must be healthy; no carcinogens, no pthalates, has to last 200 years (min.) and be net zero energy. If we could get all the housing in Canada to be net zero and have to last for 100s of years, we’d be so far ahead of every other nation. I would assert that the logical, reasonable way forward in dealing with cancer is to address the cause, not the symptom.”

Tweaking:  As noted above, the insulative value of the house is much higher now, as we took data from our research and plugged the weak spots.  Hence the north wall was studded out and blown cellulose applied turning the otherwise R-8 wall into R-40.  Without testing, we suspect we now run at an effective R-30 for the whole house as a unit.

Another tweak, in the effort to just be nerds, was to figure how to cool the house in summer.  During irrigation season our rain water storage gets used up, and we then slowly top up our irrigation tanks from the well.  The well water is about 6-7 C.  As we designed our hydronics to handle an open loop (choosing appropriate pumps and materials that don’t oxidize), we flush out the hydronics at the start of the season,and re-route the irrigation top-up.   Each evening the well top up has to run through the earthen floors enroute to the storage cisterns, thus cooling the house.  Precautions  in place with proper double check valves.  If we were to re-design the house, we would have installed a parallel set of potable water tubing alongside the hydronic tubing when we installed the floors.

Baird council initiative of the week:  Where to begin…lots going on.

Ann:  To read Ann’s update to Highlands council on these topics click here:

Council Failure of the week:  Nothing this week… and like the last time this happened, we noted were were not trying hard enough.

Update on Broom composting project for our community:  As readers may be aware, we initiated a project to take broom and gorse collected from the Highlands Broom bash, where volunteers clip the broom in bloom, bring it back to the Community  Hall site, chip it (with thanks to Colin O’Hare and his company Sky View Tree Care).    After chipping, we allow to sit for two months, then bring in a little horse manure and do what we do best… stir the Sh*t.   Four months later we have the most amazing spongy and moist material we have ever come across.

Broom and Gorse after chipping

The final intended use of this material is for the community gardens that will be developed on this same site in about 1 years time.  That is full circle, taking an invasive species that is one of our largest fuel sources for wildfire, that when harvested and composted is a huge source of potassium and phosphorous, and a major moisture retention media, and using it to grow food for the community.  That’s more than just Fire Smart.  What a way to end an update.

All the best,   Ann and Gord

One response to “Building for Climate Change”