Working on the Front Yard

We are finishing off zone 1:  For those not familiar with permaculture zones, zone 1 refers to the growing and living area just outside our doors and closest to our homes.  This is prime real estate for beauty and function.  (Gord almost meets these criteria, therefore he is only a transient part of zone 1 for a few weeks).    We have already utilized most of this area over the last 10 years, but the final piece is the area in front of the cob house between the two front doors that used to be occupied by an enormous and dangerous rose bush.  This area gets smoking HOT in the summer and even gets full sun in the winter.  Absolutely ideal for creating micro climates for perennial and annual plants that like it hot and also like winter protection AND for growing winter greens.  We spend the most of our ‘relaxing’ time in zone 1, so it makes sense to create more beauty and food to nourish our bodies and our minds. 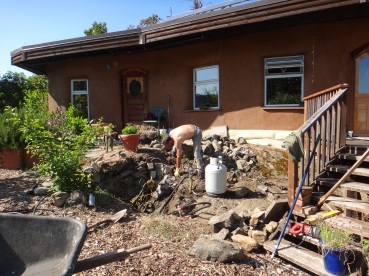 Remove the rose bush and dismant the rock work around the well.  Build a proper well cover and build a sitting bench to shade and protect propane tanks and also contain winterized irrigation connections.  Then we can design and build new raised curvy beds.

Eco-Sense Video of the Week:  School of Permaculture filmed Gord last summer showing how we dry food with water.  Here’s the 3 minute video: 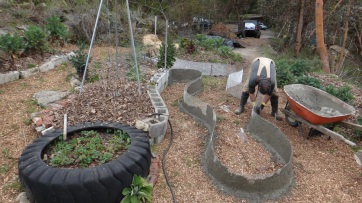 Eco-Sense Photo from the Past:
Building our first Curvy Bed 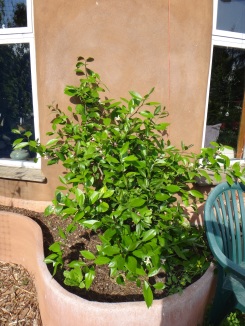 Gord’s thoughts and rants: He’s tired of people that get labeled environmentalists!

It is clear there are only two groups of people out there in the  “real” world. The “Forces of No, leaf licking, socialist, environmentalist types”, and the rest of the sane world.

If you are a Mom and your groundwater  fed kitchen tap now catches fire and your kids can’t drink it due to fracking… does it make you an environmentalist to oppose the fracking industry?

If you are a farmer and your best fields are about to be flooded, and you oppose a dam… does that make you an environmentalist?

If you are a forester and your working window is curtailed due to earlier closures in the season, and for longer periods, and you have concerns of the climate impacting your living… does that make you an environmentalist?

If you pull your drinking water from the ground and

What if your culture, your community, or those who have relied on shellfish, can no longer harvest because of sewage outfall… oil spill… mine tailing contamination… ocean acidification and soft shells, does your opposition make you an environmentalist?

What if you are a researcher and are studying mass extinction and species collapse… or you live on low lying islands that are being hammered by storms and swallowed by the seas… or a farmer that has not seen rain in four years, does that make you an environmentalist?

Please explain, as obviously I do not understand. This past week in the news we have seen the media report on the Kinder Morgan approval, and watched Brad Wall (premier of Saskatchewan), apparently dismiss the same science he relies on for his communications, transportation, and health care. Those damn environmentalists… those damn “Forces of NO”.  For reference, Brad Wall referred to climate science as “some misguided dogma that has no basis in reality.”

Here is an excerpt from a person on Facebook to Gord in reference to the discussion on Brad Wall’s throne speech. The response placed in context was a person who spent two years to get the OK and funding to build an outside public flush toilet, and had a single conversation with Brad Wall, and thus confirmed without a shadow of a doubt that Mr. Wall was a nice person and I should just send him a letter stating my concern. (WARNING… foul language).   (Paul from Duncan): “You live in your world while the rest of us live in the real world stop your whining and complaining and do something about it it took me 2 years and I got something done instead of living in the stone age welfare socialism selfserving crap you enjoy because of the world you don’t like kiss my hard working tax paying ass.”

Why does our culture simplify the issue into Us and Them… the real world folks and then the  “environmentalists” (or otherwise Moms and Dads, foresters, farmers, First Nations, scientists, fisherman, neighbours).  To the CBC: Why run from the complexity, why not actually take your responsibility as a public media source and properly and clearly frame the issue rather than be lazy and dumb it down?

6 responses to “Working on the Front Yard”