What’s it Worth…Calculating the Carbon Footprint of Environmental Destruction

Monday morning entertainment at the Baird household involved a carbon calculation for the damage being inflicted upon the land next door to Eco-Sense. 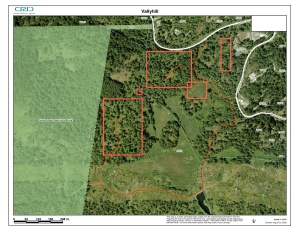 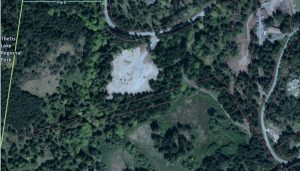 The Scar next door (it is now 3 times bigger)

Over the past year, we have borne witness to the desecration of approximately 20 acres of forested land between our eco-sense home and Thetis Lakes Park.  This large parcel of land is shared between two municipalities, Highlands and View Royal.  Goodwin Farms as it states on the sign on Munn Road, is one of the original homesteads of the area.  The land consists of many connected wetlands with some rocky outcrops, high bluffs backing onto Thetis Lakes Park, a beautiful creek, and various streams that feed the wetlands. 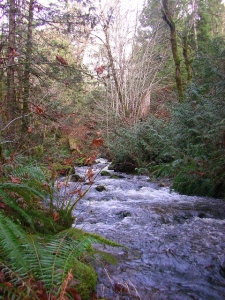 Creek on Goodwin Farm (before bridge)

For one year there have been diesel guzzling machines clearing the land, fires burning the life, and dumptrucks bringing in an estimated 10,000 loads of untested clay fill.   The damage started with the loss of approximately 10 acres of forest in the Highlands portion bordering Munn road (Feb 2011).   The project then ventured into View Royal (Nov 2011) to clear cut another approx. 10 acres on the other side of the creek and wetland.

Yesterday at dawn I ventured over to see what was really going on…and despite listening to excavators, dumptrucks, fires, and chainsaws for over a year, I was unprepared for the extent of damage to this spectacular wetland forest.  (We had had phone conversation with the land owners over 3 years ago and had asked at that time if we could walk the land and were given the ok). 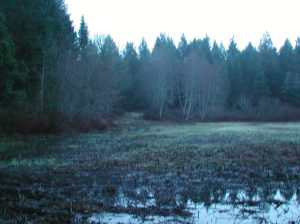 As mentioned, approximately 20 acres have been decimated, but in addition to this, a wetland in View Royal, (across the street from our home), that was covered with wetlands shrubs 8-10 ft high has been mowed down and organics removed, and a bridge has been constructed over the creek in a riparian zone.

Now, noise is one thing that we have had to deal with 7 days a week…listening to the crunching of forests, the grinding of excavators, the screaming of chainsaws, and the beeping of everything that goes into reverse.  If this wasn’t bad enough, we have had to endure an enormous spike in rodent populations competing with us for our local organic food.  We have lost entire crops to these displaced creatures and have attempted to cull the population with traps…sadly we have ended up killing as many song birds as we have rodents.  We have however enjoyed the enormous new population in woodpeckers, owls, and hawks.  But the down side is that the woodpeckers are damaging many of our healthy douglas fir trees. 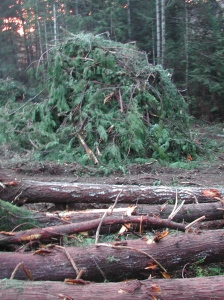 Now, just when you think it can’t get worse…it does.  About a month ago, our well water started to taste VERY metallic.  It had been five years since we last tested, so of to the lab went a water sample.  And guess what, it failed on three counts; coliforms, nitrates, and dissolved solids.  As well , all the dissolved metals were higher that historical testing data…you know things like LEAD.  Yummy!  Today we are shocking the well and testing the water column depth.  It would be difficult to prove what caused the failed test…even lack of rainfall this fall/early winter (possibly due to climate change) may have contributed.  But, knowing what we know about ground water recharge and the importance of wetlands, it is not unreasonable to question the impacts of deforestation and untested and possibly contaminated fill deposit may have contributed to the quality of our most precious ground water. 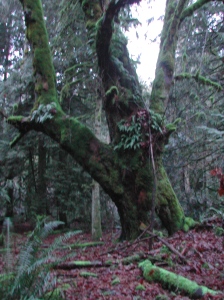 Here at Eco-Sense,we have made it our life’s work to live a low carbon lifestyle and to teach others about the benefits of such.  Our individual carbon footprint is about 2.8 tonnes perperson (about the same as for the average German person)  The world average is 4.5 tonnes.  And get this, the average Canadian is 18.8 tonnes of CO2 per year.  By now most people know that in order to avoid runaway climate change that will leave the planet uninhabitable to life as we know it, we ALL have to reduce our carbon footprints to zero in the next few decades.

So, just for fun, we took some time this morning over coffee to calculate the carbon footprint of the activity next door on Goodwin Farms.  We used various sources for our information.  “The Climate Challenge; 101 Solutions to Global Warming” written by Guy Dauncey, is a well researched source of information.  (In particular, check out chapter 1, with a photo of our house and family).  We did an estimate on the number of dumptrucks, the concrete blocks, the crushed rocks, and the amount of diesel fuel used over this one year period following the Environment Agency carbon calculator.  We were shocked at the the results…especially when combined with the loss of sequestered CO2 in the forest and soils.

Why the hell are some people allowed to spew such excessive CO2 into the atmosphere while the rest of us work our asses off to reduce our ecological footprints?  Our culture tells me that they must be 2539 % better and more important than me…and that every other living thing is NOT important.   But even more importantly this illustrates how it is not the regular people causing the problem…sure we all need to do our part, BUT…it’s the wealthy elite that have the money.  The top 10% of our population is causing the problem by means of the laws that we the majority (the 90%) have control of.  We can change the laws if we stop allowing the money and power to destabilize our climate and destroy our ecosystems.  So, while 90% of us bust our butts to reduce our carbon footprints (as we should), and give up our airflights and reduce our driving, the carbon emissions continue to soar.  The top 10% who control the media, the message, the sheeple (sheep people), have actually convinced us that we are the problem.  The entire Highland’s population (2000 people) would have to cut their carbon emissions by 3.5 tonnes to offset what has just happened on this land…then there’s all the other such equally devastating projects currently occurring in the Highlands.  Pretty soon, none of us could have a carbon footprint if we were to truly offset what the top 10% are emitting into the atmosphere.   See table.  We know what needs to be done.  We need a price on carbon (provincial and municipal level) and we need to take personhood rights away from the corporation and give rights to nature (I have heard that this can be done at the municipal level).

Why the hell do our laws allow these people to commit ecocide on this land and impact all generations of people and species that occupy this part of Vancouver island now and for many hundreds of years into the future…if there even is a future for the earths species…and the science is telling us that that is becoming increasingly UNLIKELY.  Listen to Gwen Dyer on CBC IDEAS with Paul Kennedy.

So it gets worse…The damage may only be getting started and there are all kinds of rumours flying about what may be the plan for that land.  The official line is that they are building a barn and pasture land.  Unofficially I have heard that Fort Victoria may like to move to the Highlands so that they can develop that much more valuable land where the RV park currently sits.    Great!  An RV park next door to Eco-Sense.

So for now, I’ll grab my bottled water (since I can’t drink mine), a snack of imported veggies (since the rats ate mine), and try to find some sanity on a hike…now if I could only find some quiet natural place to go for a hike.  Just think…we’ve got it good compared to what our kids are facing.

This entry was posted in Uncategorized. Bookmark the permalink.