What Does Literacy Have to do With Municipal Elections?

It turns out that literacy has a great deal to do with municipal elections…especially in the Highlands. This is why we have BOTH decided, at the last moment, to put our names forward for re-election as municipal councillors. Yes, we are running again.

In addition to being literate in the basic sense of reading, riting, and rithmetic, there are 5 other ways that are critical for elected officials to be literate. Literacy with the FIVE capitals, each with their own currency, is easy when you live it like we do with our Eco-Sense lifestyle, but full literacy is lacking with most politicians at all levels of government.

Story-Telling and the FIVE Capitals

Five years ago we had a nursery customer who turned out to be a City of Colwood staff member – he was an engineer. We gave him a quick tour of the homestead after he picked out his fruit trees. He was amazed at the integrated systems including our lifestyle, food, energy, water, carbon/natural capital and finances. He was so inspired that that he asked to bring the rest of Colwood’s engineering department for a tour. They came for a tour and we spoke about integrated municipal infrastructure.

An hour after the tour the phone rang, and a request was made to bring the Public Works and Parks departments for a tour. In this tour, we discussed integrated asset management planning and management of built and natural infrastructure.

A day later another request, this time for the Planning department, many whom we knew already, and evolved into integrated land use planning, net-zero zoning, and how to think of multiple capitals from a planning perspective.

The last call was for a tour with Colwood’s council, the CAO, and finance – discussions focused on integrated governance.

Then Engineering hired us to consult and design a food forest for a new park. This new park integrated stormwater catchment system into a hugelkulture (saving many $100,000’s in built infrastructure). The engineering team employed the concept of watching and observing local high school students make their own pathways through the park, then engaged the trade students to build out the trails for the student’s chosen routes. The culinary students were invited to look after a culinary section of the food plants. First Nations were invited to have a native and healing plant section.

And Finally, we were invited as special guests at the ribbon cutting – the developer for Royal Bay was also in attendance and whether they knew it or not the intention was to show what the City would like emulated in the commercial development section of Royal Bay.

Despite not sitting on the Colwood Council – we influenced the whole of the council and staff and empowered them to employ integrated systems thinking that incorporated the 5 capitals in the decision making process.

Have you guessed what the five capitals are?

How are you going to vote in this municipal election?

Please vote for literacy…especially in the Highlands.

Nothing but dribble! (and plants)

Yup we’re talking water.  Even Californians are talking water, or at least the lack of, and consequently farmers are being pitted against city dwellers, and rich pitted against poor (determining  who gets to fill their swimming pools).  All of a sudden that 3 litres of water that go into each and every almond is creating ripples (if there was something to have ripples in).  Who has more rights; the individual or the corporation or Nature?  It really is a fascinating opportunity to watch western culture in the throws of catastrophic issues that it is supposed to be immune to (kind of like the Titanic going down).  We are a culture that is supposed to be able to “conquer” all problems with technology and money.

The mighty almond, is an interesting story, as it used to be grown on bitter almond rootstock which is drought tolerant, but growers switched to the thirsty plum rootstock and then planted out the deserts.   Short term gain…long term pain.  Huge vast quantities of almond orchards (which already have a bad rap for  devastating bee colonies due to monocultures and no other food source), are creating some fuss as city folk see the waste of “their” water resources.    Olive growers,  impacted by the same drought, are tearing out their olive trees and planting almonds, not because they are more drought tolerant, (quite the opposite), but because the lower margin of profit on olives means they can’t afford the water, and thus are switching to the thirsty almond because it can help cover the increase price of water.   Magical thinking!

The pattern of this drought, highly predicted (by science) to get much worse over time as climate change and weather and ocean current patterns have dramatically shifted.  On the other hand, popular culture (the media) and political elements both seem to expect a magical re-emergence of rains, and it’s only a matter of time.   (True…but it may be 10,000 – 100,000’s of years kind of time).  What is also of interest beyond the temporal considerations is the spatial implications as the drought margins are migrating further up the coastline and into BC.    We would be stupid not to prepare for this as we are already seeing the implications.  Erratic patterns are seen along the margins, and this year the Mid Vancouver Island  region is scratching its collective head wondering what to do with a snowpack of only 15% (85% lower than normal).  No reserves, and low stream levels… who is going to get the water… the salmon, the industry, the farmers, the residents?

Bring in Gord’s experience on the lower island, where he sits on both the CRD and Jaun de Fuca Water commissions.  Discussions of water quality and supply are always the order of the day.  No names or particular commissions will be mentioned, but three stories shared below.

Story #1 – One commissioner looks at our water supply levels and says they are not in support of promoting conservation, that her constituents ask why restrictions are needed if there is water in the reservoirs?  The answer that she gets back is that levels are required to ensure the water is there for the rivers that drain them, because of the salmon.  Her response “Really, are you kidding me that it all comes down to the Salmon?”

Story#2 – Another commissioner, (a mayor) speaks up about pricing and says that the view he has is to not promote conservation as it means less income for the CRD, and that “If you have it, you should sell it.   I have always said conservation is the wrong approach”.

Story#3 – The Capital Regional District is in the public consultation phase of it new draft Regional Sustainability Strategy.  In this strategy it speaks to living within the means of our watershed and not having to expand it, and to ensure all activities down stream are in balance as the CRD develops and changes in the next decades.  Yet the other aspect of the RSS is that it speaks to growth…(you know “sustainable growth”…more magic thinking), it speaks to removing the present rules that contain the delivery of reservoir water to rural areas outside the urban areas, and is promoted by a few individuals who want to see growth (sprawl).  Dare I say this goes against the whole concept of sustainability.   Water is where the battle lines have been drawn on this topic.

Here in the Highlands Rights to Clean Water is topic that is being floated.    The Highlands Stewardship Foundation, a group of wise elders (mostly elders) approached the UVic Environmental Law Centre to have a law student draft a roadmap of actions the Highlands could take to better protect its groundwater.  The student did a wonderful job, and took into account the new BC Water Sustainability Act, the Highlands existing bylaws, zoning, OCP, ICSP, Policies and Groundwater Task Force Report, as well as the Community Charter and Local Government Act.    The surprising outcome… communities DO have regulatory tools already in their jurisdiction to affect and impact groundwater protection – but only through controlling the surface waters and recharge zones. 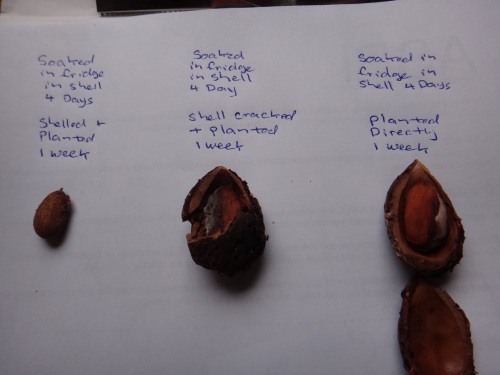 Outside of the political spectrum, and down here on the ground (or atop the rock)  at Eco-Sense, what does this look like?  Trials with almonds grown here on Vancouver Island are progressing where Gord is germinating almonds from an 18 year old tree owned by their friends Jamie and Angela.  Pictures of Gord’s attempt to crack the nuts was posted in our last update.

After two weeks and three different trials one method seems to show the most promise, dare we say Gord may have cracked this nut?    Here are the nerdy details.    Soaking then cracking/shelling/sowing – Soaking then cracking/sowing – Soaking then sowing.   The internet would have you think the first two options are best… but to date the healthiest most active germination with the least rot is sowing whole in an uncracked shell… a “well duh” moment… that’s how they evolved.  Oops… its actually magical!

Chopped and dropped all the old salad greens –  will compost for a bit and then plant more sweet potatoes in the mini greenhouse.

Now on to plants...local perennial edible plants.  Something  really positive to sink our teeth and communities into.  Sunday 10am-2pm at Eco-Sense (3295 Compton Road in the East Highlands, Victoria).  Even if you’re not growing plants come on out to look around anyways.

Here’s the plant list kept mostly up to date (prices include GST).

This week:  Still lots of sweet potatoes slips…we just planted ours under the poly tunnel…they like it hot.

We have some free raspberries to give away and some ever-bearing strawberry starts for $3 each.  We also have a whole bunch of little Good King Henry (spinach like) starts for only $5.  This is an awesome way to plant once and eat for years.  Ann is creating a whole garden bed just for perennial vegetables.  We also have skirret (a root veggie), and perennial arugula.  Restoration Seeds sells seeds for all kinds of perennial veggies…this is where Ann gets most of her seeds (and information) on these.  And then there are tomatoes, we have planted ours and they are flowering!  We have tomatoes available in 1 gallon pots (Black Prince, Black Early, Black Plum) – all early cool hardy  heritage (indeterminate) varieties.

Chickens won the lottery…the kale lottery. We cleaned out the solar roof top garden and planted watermelons and squash…needed the space.  We have two broody chickens and one is due to hatch…so come Sunday, if all goes well there may be some little chicks saying hi to the world.

Love these trees…very beautiful foliage.  We have two Cornelian Cherries planted near the Eco-Hut (need two for pollination).  The fruit can be eaten when fully ripe or turned into an olive like food when the cherry is still green.  I think we may have some fruits this year.

We will have more turmeric an a couple weeks.

Its all pretty exciting… with things off to an early but thirsty start.   Watering already underway.  Once June hits, it will be full out chaos, but luckily the grey water systems will be helping out, the rainwater harvesting integrated  with well will be busy.  Gord’s long awaited rainwater certification should be not too far behind.

Don’t be a stranger this Sunday as the plants are magically disappearing and before long POOF! plant sales will be closed for the summer.