Quick notices and then on to our blog post

it is just over 14kms to get to the start of the North Coast Trail.

Our first vacation in 4 years was WOW.  Thanks to Tayler and Solara and Jocelyn and Jarvis for looking after the homestead for 15 days while Ann and I set off to be one with the North Coast Trail in Cape Scott Park at the northern tip of Vancouver Island.   And I should says thanks to Ann for prepping 14 days of food… I so enjoyed carrying it.  (Note: Ann’s comments will be in parenthesis).   (Gord’s new nickname is the Sexy Sherpa Dude…it’s amazing what a man will carry with regular flirting).

In our typical naive fashion we decided not to follow the conventional wisdom for this gruelling hike, which is to hike the trail one way, usually from east to west.  No, rather than fart around with water taxis and shuttles we decided to just park at the Cape Scott Parking lot and hike it in… then out.  Needless to say we are not seasoned hikers so we were a little concerned about our 50ish year old knees, hips, ankles, backs and legs…not to mention our feet.

Ann spent two weeks prior working on food, drying venison jerky, further drying raisons and prunes, dried apple leather, and putting together all the very lightweight meals.  She packaged up one of her 6 month old wash rind hard cheeses (think homemade parmesan), prepackaged dinners with our dried leeks/kale/tomatoes/nettles, even dried a batch of our leftover morning fermented mush (that turned out fabulous according to Gord’s tastebuds).  All in all we started with approximately 46lbs of food.

Once in the Cape Scott parking lot we spent the next five days hiking to Skinner creek, 49 kms from the parking lot.  As we had planned to hike back, we did stash some of our food along the way.  We decided not to hike to Shushwartie Bay, the last leg, and instead use the two days that would have been used to go there and back to Skinner creek, and instead use that time to do another trek in Cape Scott Park.  (more on that below).  So at Skinner creek, we turned back and retraced our footsteps.   The terrain was technical, there were a lot of blow downs that had not been trimmed by parks yet, so we found that we had to saw through some roots and branches to get past.

On our trek in, we encountered hikers coming from the east.  All were shocked to hear we were doing it both ways, and by the time we had made our return, park rangers had heard of us.    With 98 kms complete, our packs lighter and our bodies stronger (10 days) we took a day off to hike around Cape Scott, then headed to San Joseph Bay for the final trek.  The final leg was from San Joseph Bay, up over Mt. St. Patrick and then down past Sea Otter Cove to Lowrie Bay.  (We had been to Lowrie Bay before… by kayak on our honeymoon 12 years earlier). 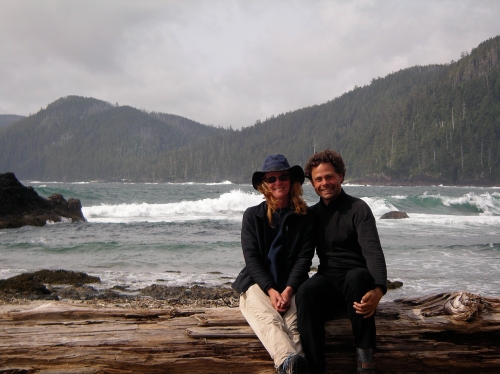 The Trail from Mt. St. Patrick to Lowrie is not on the park maps, and park staff only hike it once per season.   Needless to say it is off the beaten path… if you could find the path.   The distance one way is somewheres between 6-8 kms… not really known for sure.   This was the most challenging epic hike ever.

The trail that is off the beaten path. 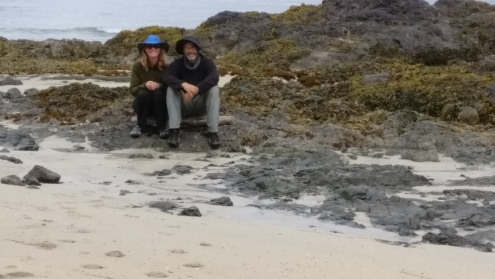 We had multiple encounters with bears and wolves, both employing our skills to be loud and obnoxious.  (the recommended approach when encountering a wolf is to stand together, make yourself look big, and stand your ground… which I what I did.  Gord on the other hand grabbed the camera)

Who needs bear spray when you have Ann who hasn’t washed her hair in 14 days?  (It had amazing body and I washed my head a couple times in the salt water).  No comment on Gord who wore the same merino shirt and johns day and night… except to say there are some pretty fine vinegar bacteria that we should have harvested before they, (Gord included),  were washed.    We even had a surprise encounter where we scared a bear who jumped up a tree… a massive Sitka Spruce… and we jumped to the left.  All three of us had our hearts racing.

What was so wow? 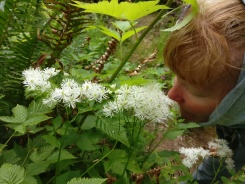 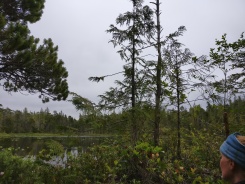 Photo taken by Park Rangers near Cape Scott Lighthouse.  Our first contact with the outside world and they gave us an update on BC politics.

Leave a Reply to Jan and Nelson Meadows Cancel reply