It has been a couple weeks since we closed the nursery for the season and some may wonder “what will Ann and Gord do with all that free time”?    Well, it allows us to focus on another aspect of what we love to do.  These past three weeks our time has been focused on some really wonderful projects within the region that draw upon our knowledge and passion around water systems, policy, food systems, and teaching.  Hmmm… where to begin?

We are working with a local municipality to assist them in the creation of a park; a 1 acre fully planted food forest with integrated systems.   This public park addresses public accessibility, food producing perennial plants, water systems, education, beauty, carbon sequestration, habitat creation, and food security, to establish what we consider to be the first regional park that FULLY incorporates permaculture at a large scale. 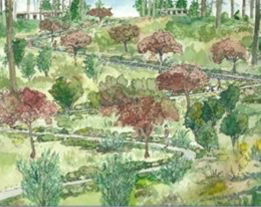 Potentially  systems will incorporate storm water runnoff from roads  into large scale hugelkulture beds, dry planting zones, deer control methods from fencing to planting, living fences, high school student and community involvement, and education – just some of the areas covered in this project.  Diverting cars off roads by having a park and trail systems that are a more direct route to commercial areas, and thus drawing pedestrians and cyclists through the food forest and off the roads, as well as providing a park space for a new potential small scale community focused commercial development, all the while sequestering carbon in the landscape.   What am I missing… oh yes, about 1/3 of the municipal staff from planning, engineering, parks, public works, have dropped in here at Eco-Sense, and are seeing the concept  of INTERCONNECTED SYSTEMS as applied to food, water, energy, lifestyle… and some of our poor humour… and everything  else.    What an inspiring project to be asked to participate in.

High points of the municipal tours:

Another local government has also engaged the services of Eco-Sense  in an effort to complete their existing but poorly functioning rainwater harvesting system and make it potable.  This would seem to be a fairly strait forward task ensuring that you store the water clean and then properly treat it to a potable water standard.    However, the initial design followed the  “silo effect” wherein it had been nicely done by an engineer, but without the understanding  of the bigger picture usage patterns and needs. 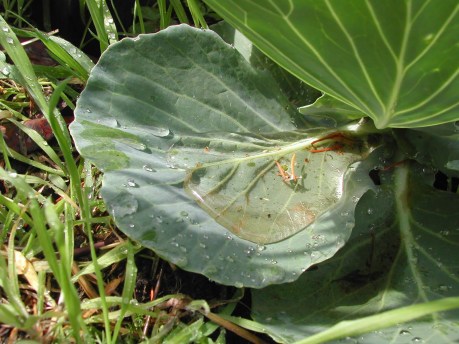 This project was designed as post disaster assembly centre to serve many people where a UV system was installed to meet the potential demand of water flow for this rare situation.  The reality is that the office’s daily use is so vastly less that they can not create enough water flow to keep the UV sterilizers cool, causing the UV system to overheat and dump the water.   Consequently, the water is lost, water that is presently trucked in.    Not an efficient or resilient system.   In addition the system at 10,000  gallons (1/2 potable & 1/2 non-potable) is used to flush toilets and urinals – so in event of an emergency assembly during a disaster, the water would run out in a couple days as it would be consumed by flushing.  The foresight in planning has been exceptionally good by these folks, and again I am very pleased to even have the chance to watch how they continue to care for the community they serve.

The goal for this system:  Create a system where rainwater can be harvested, robustly pre-filtered and stored clean, reducing the need for trucked water, and during an emergency, water usage is diverted away from non-potable uses (flushing toilets) and treated for more pressing needs.  Perhaps composting toilets will be utilized as part of the emergency plan?

Back in April the draft document was posted for public review.  Thank you to all that read the 135 pages of policy.  Ian Ralston took that information, updated the manual and presented the final draft to MOH.   Two weeks ago the MOH signed off on the document and we are just awaiting the legislation.    I am pleased to say that some of the requirements have been softened and are more in line with the science.

As a council here in the District of Highlands, we have been very concerned about protection of ground water quality and quantity.  Most Highlands residents use ground water from individual water wells.  Prior councils engaged a consultant several years ago to study our aquifers and report on their health and the impacts of climate change; the current council engaged the UVic Environmental Law Centre (ELC) to review the ground water reports, our municipal policies, and the new BC Water Sustainability Act; then we had our amazing Highlands Select Committees look at everything and make recommendations. 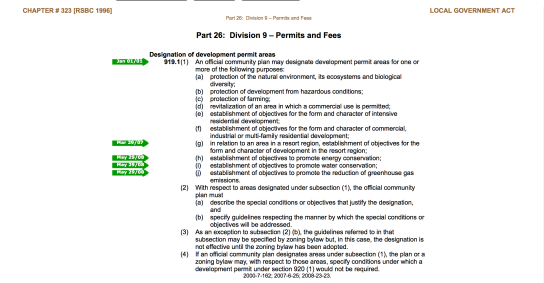 Now the next stage is to summarize the input and *hopefully* create a Development Permit Area that ensures that any land use must safegaurd the ground water, that contaminants do not flow into aquifers, and that all neighbouring properties to new developments have no negative impacts on their quality and quantity of ground water.  Gord is writing up a draft for Highlands council to consider and hopefully Highlands sets an Aquifer Protection DPA policy to fit community values. Potential failure?  Always a potential…especially as climate change is moving so much faster.

How fast is the Climate Changing?    Vic Derman, a long time Saanich Councillor and the Chair of the CRD Environmental Services Committee, wrote a report on climate change    that he presented 2 weeks ago.  Watch the video section starting at 5.4.  CRD Video

“Rationale: In January 2016, CRD Board Chair Barb Desjardins asked the Environment Committee to provide a report detailing how the region should respond to climate change. The Board Chair’s request is opportune. Recent evidence suggests that climate change is accelerating and poses an ever growing, potentially critical, threat to human society and all species on our planet. Only three years ago, generally accepted estimates indicated a maximum sea level rise by 2100 of about 33 centimetres or 1/3 of a metre. By 2015, these estimates had been revised to indicate a rise of about 1 metre. Recently, study of the West Antarctic ice sheet revealed deterioration at a much more rapid pace than expected causing researchers to suggest sea level rise of 2 metres by century’s end. A subsequent review of this data by the National Oceanic and Atmospheric Administration, a U.S. governmental agency in the Department of Commerce, concluded that a near 3 metre rise could be expected, quite possibly by 2050 – 2060 as described in the following quote:
“. . . In a presentation at the Risk Management Society’s RIMS 2016 conference in San Diego April 12, a top scientific official with the National Oceanic and Atmospheric Administration said that recent, as-yet-unpublished data from Antarctica suggests that sea levels could rise three meters — almost ten feet — by the middle of the century. Margaret Davidson, NOAA’s senior advisor for coastal inundation and resilience science and services, told conference attendees that “the latest field data out of West Antarctic is kind of an OMG thing.” Davidson said that data shows sea level rise could reach three meters by 2050 or 2060, a much steeper rise happening far sooner than even the most catastrophic scenarios currently available in peer-reviewed journals and the far more conservative estimates published by the Intergovernmental Panel on Climate Change. That steep a rise in sea level would put significant parts of many California cities underwater in just two or three decades. . . .”
These projections have yet to be fully reviewed and accepted by the broader scientific community. Nevertheless, if correct, they suggest a catastrophic outcome if serious mitigation does not occur very quickly. Severe environmental damage would almost certainly result. Equally alarming are the potential fiscal and social impacts. A three metre rise would eliminate, or put at severe risk, hundreds of trillion dollars of assets. Protecting them would be extremely expensive if it were possible at all. Meanwhile, society would likely face hundreds of millions of “sea rise refugees” as low lying coastal areas were inundated or became otherwise unlivable. Another metric is equally alarming. Delegates at the recent Paris conference on climate change agreed that society cannot exceed an absolute maximum of 2 degrees Celsius (C) warming without risking run away climate change. However, the conference also agreed that keeping warming to 1.5 degrees C would better limit damage and provide a much greater margin of safety. Subsequently, a researcher at Concordia University created a “climate change clock” to indicate when these targets might be reached. His answer: Without a substantial increase in efforts to mitigate, 1.5 C will be reached in about 15 years (2031) with 2.0 degrees being reached in about 26 years (2042). These dates suggest very short time lines to accomplish the paradigm shift that all communities, including our own, may well face. To date, our responses to global warming could best be characterized as incremental and slow. Given the likelihood we are facing an increasingly urgent crisis, we must consider the need for an immediate and much more massive response.”
Here is a link worth checking out…it includes a short email between Margaret Davidson and Eric Rignot.  https://climatecrocks.com/2016/04/21/caution-new-sea-level-story-may-be-a-step-too-far/

So as nursery season closes, and Ann and I become bored with all our extra time (HaHa), desiccated by drought and loneliness from the closed nursery, we put on our other hats and dive into activities that wet our whistles and fill our vessels.