Yes, finally, after three weeks of selling plants that are basically dormant sticks, we now have leaves…lots of glorious leaves.  Every day we enjoy walking through the food forest and the nursery to look at the leaves and some flowers.  This is an excellent time of year to plant your new trees and shrubs as the soil is still cool and moist.

This week, we have more new plants to add to our stock of almost 200 varieties of plants.  Here’s the updated inventory list with prices (all prices include the GST). 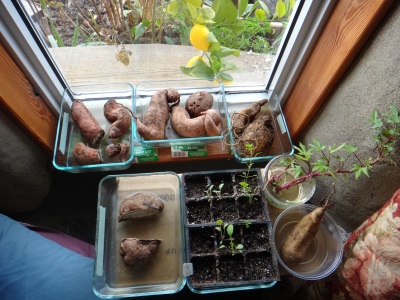 Sweet potatoes are sitting in the window and starting to make some eyes…in a few week the little sweet potatoes starts should be ready (SWEET!).  We had an abundant crop of these amazing tubers as did many others who purchased their sweet potatoes slips from us last year.   And yes, those are lemons growing outside the window. 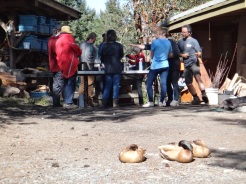 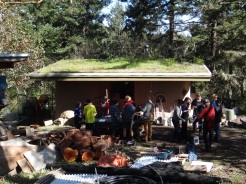 Grafting Workshop:  It was a great success with teens and adults.  Everyone learned about grafting and went home with two of their very own grafted apple trees.  It was wonderful to see such pride on everyone’s face. 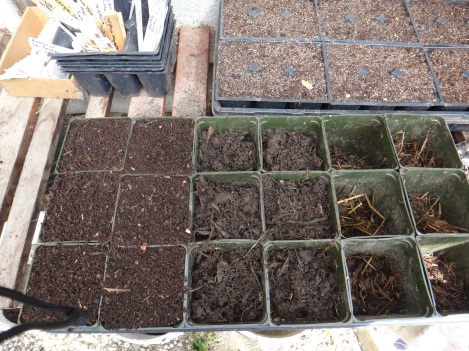 Eco-Sense potting mix.  Ann has been starting some of our veggies for the garden and has made up her own special mix.  It includes a bit of goat bedding manure in the very bottom of the pot, then filled almost to the top with worm castings (from our veggie sink composter), and then topped with a very fine sifted layer of 2 year old aged humanure.  Go tomatoes!!! 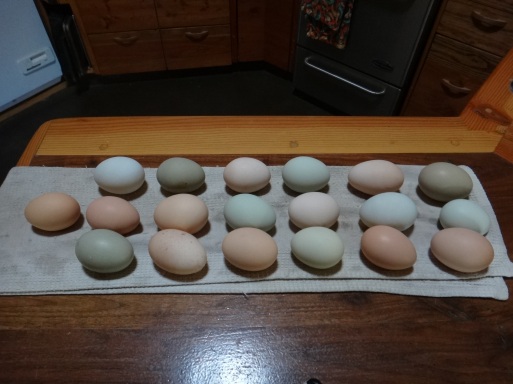 Beautiful multi coloured eggs…fresh from the chickens and ducks.

Eco-Sense Video of the week:  West shore TV did a great little video of our house a few years back…here it is (only 5 minutes):  Highlands Eco-Sense Home 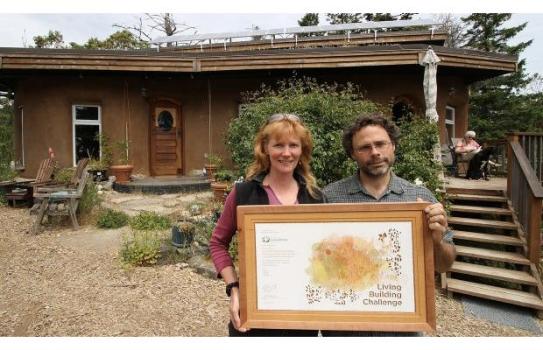 Holding our award for the Living Building Challenge

Eco-Sense Photo Memory of the Week:  The easy part was building one of the world greenest modern houses as rated on the World’s strictest green building platform…the hard part is living a green lifestyle.  Why is it hard?  Culture damn it, and the programming that pushes the Bigger, Better, Faster, More.  More often than not we feel very lonely, and perhaps slightly crazy.

Baird Council Initiative of the Week:  This is budget time for municipal governments and we talk about taxation, revenues, expenses, municipal assets and everything to do with financial and manufactured capital.  Problem is, we leave off the balance sheet anything to do with natural capital.  While I (Ann) really don’t like the idea of giving a monetary value to living systems, the fact is that our society only sees value when a $$$$ is connected,  our natural environment provides amazing and very expensive ecosystem services that would cost the municipality and our citizens A LOT of financial capital if we had to actually pay for these services.  Here in the Highlands we are mostly on ground water and rely on this resource to be clean and abundant.  If we had to pipe in water or set up rain water systems for everyone in the Highlands, this would come at a price of roughly $27 MILLION DOLLARS (900 homes x $30,000 per household).  Over time we damage the land by putting in impervious surfaces, building houses, driveways, and roads, allow industrial activities, we blast, we dig, we fill, we use toxic chemicals in our homes, we cut trees, damage wetlands, etc, and all the while, we are drawing down our natural capital and reducing these ecosystem services.  Ann spoke to this during the budget discussions and suggested that Natural Capital should appear as a municipal asset right next to roads and structures.  She also suggested that our activities are rapidly depreciating this asset and consequently it would be prudent to recover these costs to complete other restorative ecosystem projects so that we don’t have a net negative impact on our capital.  Her comments were well received, but it was noted that this probably wasn’t legal within the context of municipal laws and accounting principles.  Highlands’ Mayor did mention that these same conversations are occurring at the CRD board level.

Baird JOINT Council Failure of the Week (rant):  Given that it is tax time for local governments, both Ann and Gord felt that business and light industrial should move to a higher tax multiple.  For reference the residential tax multiple is 1 and other tax classes like business, utilities, industrial, etc are multiples of this meaning that they generally pay more taxes on their assessed value.  This is why municipalities talk about diversifying their tax base.  For reference the provincial average for light industry and business are 3.40 and 2.45 respectively meaning that they pay more taxes per $ of assessed value.  Here in the CRD there is a very large range of multiples with some urban communities having lower tax multiples, and more rural communities having higher tax multiples.  Anyways, for many reasons (which we won’t go into), Highlands had been giving business and light industry a major tax break where their multiple were close to the residential multiple of 1.  This means that residents were carrying more of the tax burden than is the standard.  AACK!    Last year our council agreed to address this, but were sensitive to the business and industrial land owners to phase in the increase back to accepted levels…Gord and I were less sensitive but were convinced by other councillors that this would be appropriate.  This year we were feeling less sensitive as we were feeling more sensitive to regular citizens of the Highlands (the majority) AND to raise some extra revenue to cover depreciation expenses… something that had not been done by any of the past councils. We both feel strongly that more money should be put away into capital reserves to cover the costs of aging municipal infrastructure and to build up funds for the coming impacts of climate change, impacts due to extreme weather events on our infrastructure.  This just seemed prudent…and since business and industry had been getting a tax break for many years we thought that their tax rates should be raised sooner rather than phased in slowly over 3 years.  We were defeated 5 to 2.  AACK again!  There seemed to be little interest in addressing depreciation and amortization as it would upset the business class… leaving the residents on the hook for a troublesome future.

And as for those leaves we mentioned… as there are more leaves, there is more that leaves, and that actually leaves us a little sad.  We develop connections with our plants… after all there is a little bit of us in many of the plants that we have given a shit about.

3 responses to “We have leaves!”