End of Season – homeless plants looking for a forever home.

We view Mother Nature as sort of the grand elected official (actually a benevolent dictator), following the laws of physics, and not in the position of administering those laws… just higher level policy.  She doesn’t care who lives or dies, that is the human conundrum, as sadly we are all saddened with the over 2000 deaths in India with the heat wave.  The short video narrated by Julia Roberts speaks to this. 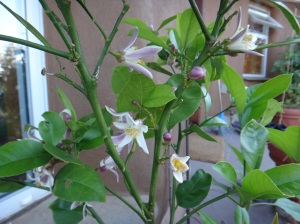 Seems like an odd intro to an update.   A little dark and gloomy… perhaps, but then being aware of our changing and unpredictable conditions is what we are needing to do.    Preparing for an expected record breaking hot summer here on the hill at Eco-Sense is part of the daily chores. 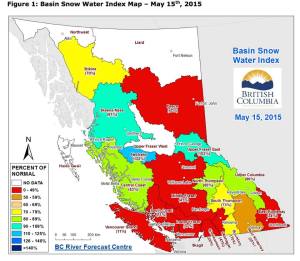 Last week the State of Washington declared a drought emergency, but obviously right across the border in BC there must be different naturals laws at work as there seems to be little or no recognition of drought.  Bring in the recent long range forecast from Accuweather – water temperatures of our coast are 2-3C higher, and then the added effects of El Nino, a low to no snowpack, drying winds, and vegetation loss expected early in the season due to the early drought thus lower evapo-transpiration on the coastal landscape, and consequently a forecast for a dramatically hot summer.     Can’t say we are looking forward to it, but in the short term strawberries are a month early and are huge because the berry bushes never went into dormancy this winter, they kept on growing.    Gord’s facebook post regarding water and what we are in for. 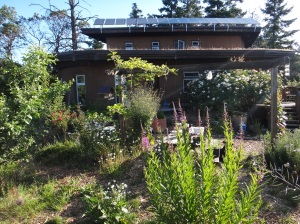 Everything is beautiful…and EARLY

SALE:  As we prepare for the hot summer, we hope to sell a few more plants so we don’t have to look after them all summer…so, we are hoping some of these plants will get into the ground…your ground.    With that in mind, we will have specials (up to 30% off on some items for our last day of the season).  We have tomatoes setting lots of fruit, likely offering first harvest in two-three weeks, Desert King figs, Hops, fuzzy kiwis, fuki, habanero peppers, Echinacea, some varieties of grapes like Vanessa, Himrod, Sovereign Coronation and Castel, strawberries, and more.   Also the last of the sweet potatoes – we are planting out a lot, to act as ground cover and for their edible greens… in the open with no covering, while the ones we are growing for tubers are in their heated home.  We also have MORE Tumeric starts to sell. 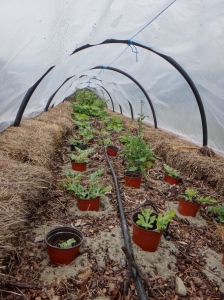 Watermelons in sand and plant pots 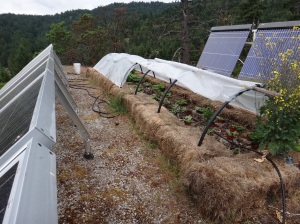 Solar roof…beginning of may and watermelons and squash thriving

One of the items we fight with every year due to the amount of mulch we use are wood bugs – they devour our peas, our squash, our watermelon.  Last year we tried something, and it worked with 100% effectiveness.    When we plant out our tasty starts we place a circle of sand around the base about 20cm-30cm in diameter, and place a plant pot with the bottom cut out over top… meaning the wood bugs would have to cross the sand then climb over the plant pot.  They don’t. 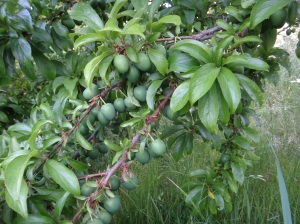 If you have not been out to see us this season, this is the last chance, and the gardens are lush and WAY ahead of where they usually are at this time of year.  We have plums dripping from trees (actually the tree is falling over), sezchuan pepper corns thicker than you can imagine on the branches, apricots ramping up, and gojis finally settling in.    What is unexpected besides the above?  The Theta hazelnuts, young 2 year old trees are loaded with hazelnuts…  our nut production is starting 3 years early! 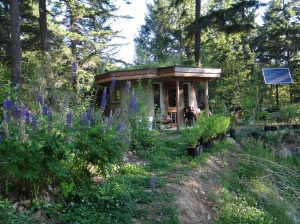 Possibly bees arrive this weekend?  We’ll see.  Lots of food over the past three years has been planted out for the bees, bergamot, phacelia, white and red clover, sweet white perennial clover at 7 feet tall, black locust… and then we have the blackberry blooms. 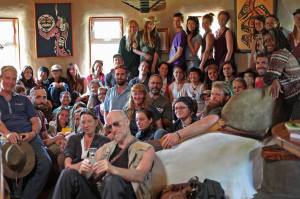 Photo of really Big Tour from OUR Ecovillage.  Thanks To Jason Guille for the photo.

The Awful truth about Climate Change:

Time to get dirty…why we NEED bacteria on our skin and in our guts.  From the David Suzuki website.

A good summary of our current global predicament and why the economy is likely to collapse sooner than later.  From Dave Pollard’s Blog

More on the Limits to Growth from Scientific American 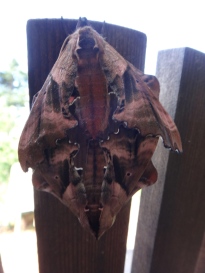 And…life goes on.  Two chicks have hatched with another momma hen sitting on some eggs.

Here’s a photo of some moths mating.  I think these are Sphinx moths.

We got tired of disposable watering wands…so here’s what Gord came up with.  (Gord hates cheap crap that keeps breaking so using quality valves, and PEX… viola). 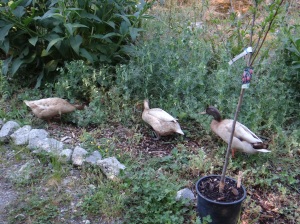 Ducks eating our cover crops and the worms…happy ducks.  This means the roots of the plants die back and feed their nitrogen to the soils…the ducks also poop and they eat less purchased food.  Win!  Win! Win!

Hope to see you out… we are staying open till 4 pm this final Sunday.

This entry was posted in Uncategorized. Bookmark the permalink.

2 responses to “End of Season – homeless plants looking for a forever home.”